Archive Entertainment Online Network: The Archive, SimWorld, EATV, Archive Forums, More...
Welcome to Archive Games
Archive Games, a freely downloadable application, allows you to quickly and easily download great games directly to your desktop! Download it now and get started!
Browse Games
About AG
Download Now!
Community
Developers
Nethack
Nethack Team
Free Game! Get it free by downloading Archive Games!
Nethack, which has nothing to do with the Internet or with hacking computers, is a turn-based single player RPG that is by far the most open ended RPG you will ever play. You can do almost anything and, what's more, the game's response actually makes sense. Each level and game is randomly generated. Pick one of 13 classes and 5 races and go off into the depths in your quest to find the Amulet of Yendor!

How to Play:
You WILL have to read the guidebook to learn how to play. You can find it in the directory where you install Nethack, or on their official site. For starters, just know that the arrow keys move you around, pressing up when an enemy is above you will attack them, and that you need to press "S" (uppercase) to quit and have the game save your state. If you die in the game, your character is gone and you'll have to start a new one.

Remember that the game is realistic... as far as fantasy role-playing games go. You will encounter monsters you cannot beat and traps you cannot escape. You'll have to play smart. If you find the game too difficult while you're just learning the controls, press "X" in game to enter "explore mode" which allows you to become immortal.

Critical Acclaim:
In short, NetHack 3.1.3 is the most elaborate role-playing environment you are ever likely to explore. This is a place to return again and again, each time for a different experience. You're really going to have to play it for a year or two and see for yourself.
-- "Fatal Distractions" by David Gerrold

Nethack is one of my all-time favorite games, one I've been playing since 1200 baud was smokin' fast.
-- Actor Wil Wheaton 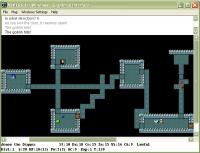