Lugaru (pronounced Loo-GAH-roo) is a third-person action title available for Windows and Linux. The main character, Turner, is an anthropomorphic rebel bunny rabbit with impressive combat skills. In his quest to find those responsible for slaughtering his village, he uncovers a far-reaching conspiracy involving the corrupt leaders of the rabbit republic and the starving wolves from a nearby den. Turner takes it upon himself to fight against their plot and save his fellow rabbits from slavery.

Lugaru's primary feature is its unique combat system. Instead of relying on confusing button combinations to perform moves, Lugaru's moves are all logical and context sensitive. For example, if an opponent aims a roundhouse kick at Turner's head, you can crouch and then stand up under the attack to grab your assailant's leg and kick him away. If you try and punch an opponent and he tries to throw you over his shoulder, you can crouch to roll painlessly out of the throw. This new combat system makes fights look and feel much more intense and believable than in any other game. You can see it in action with the gameplay movie below.

However, if straight close-range combat with hands, knives, swords and staves is not your style, you can also use stealth, but you have to be smart about it. If you cut a wolf's throat, be sure to wipe the blood off your knife or another wolf might smell it. Enemy rabbits have very keen hearing, so be sure to walk quietly, and kill enemies before they make too much noise or run to alert their friends. Also, if they do bring their friends, don't expect them to stupidly take turns fighting you. It is not unusual for one enemy to sweep your feet out from under you and another to smash you while you fall.

Because of the emphasis on gameplay, the graphics are designed to let the game run as smoothly as possible. It should run at full speed at full detail on any system with a 700 MHz processor and Geforce 3 or better graphics card. It should run acceptably on any system with a 300 MHz processor and Rage 128 or better graphics card. While models do not have as many polygons as in some new commercial games, there is an unprecedented amount of detail where it actually matters. If an enemy shatters his staff on your skull then your vision will unfocus slightly for a few seconds. Jumping through trees creates a shower of leaves (and snow if it is in a cold area). Landing an especially solid blow to the head can spatter blood on the wall and knock out a couple teeth. If you throw a knife into a wolf, blood will drip down his fur as he yanks out the knife and uses it against you. It is even possible to smash enemies so hard into walls that the surface cracks. Motion blur makes fast movement easier to track. 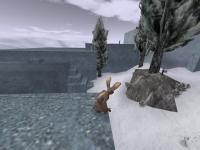 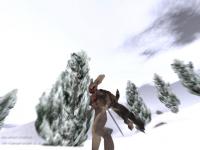 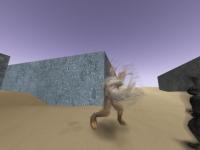 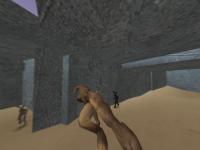 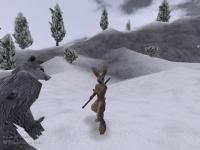 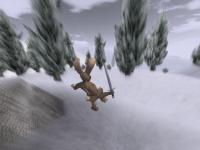